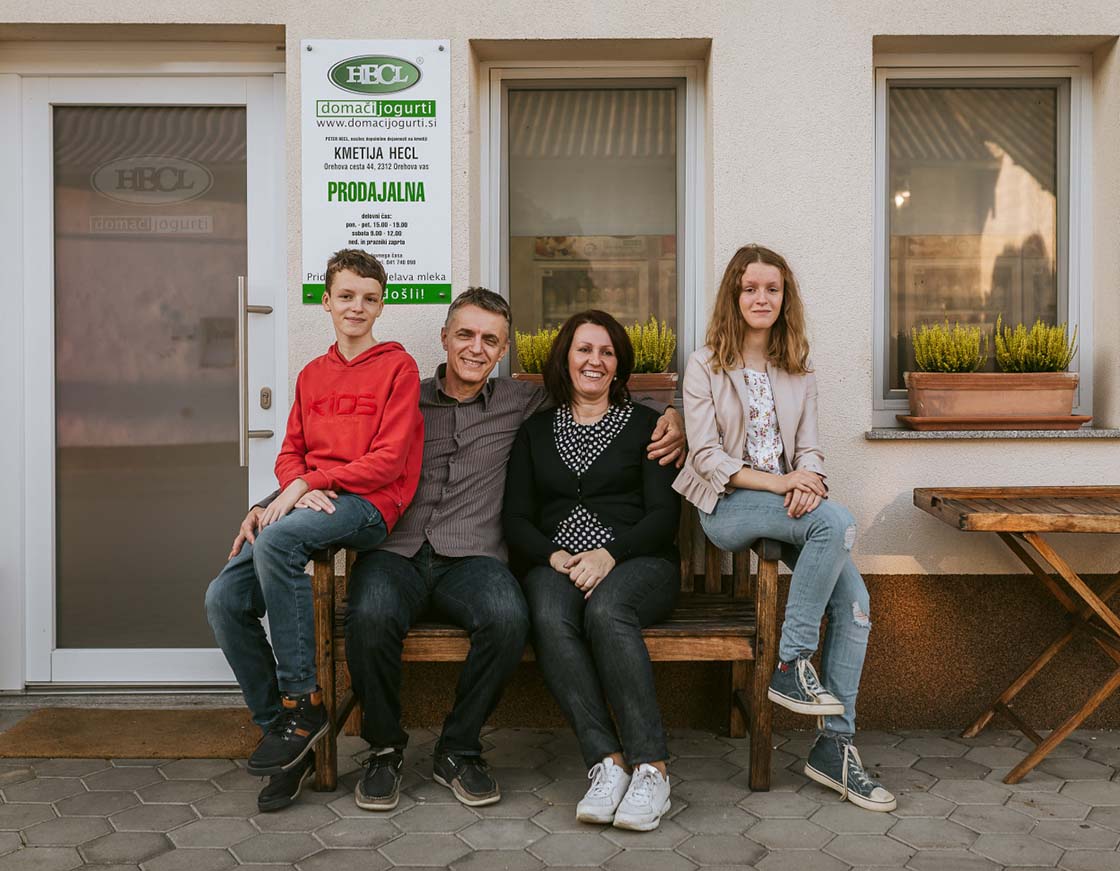 The Hecl family has been in the milk processing business since 2011, during which time their product range has expanded to 43 products.

Today, the 26-hectare dairy-focused Hecl farm is located on the outskirts of the Drava plain (Dravsko polje), in Orehova vas near Maribor, not far from Edvard Rusjan Airport. All the basic fodder for the herd, which, along with the cows, also includes young stock for restocking, totalling 35 head, is produced on the farm. Only protein and mineral- vitamin supplements are purchased.

When it comes to crop production and fodder preparation, livestock feeding, milk processing and marketing, Peter is the central figure. His wife Martina, with whom he took over the farm in 1996, works as a lawyer. Otherwise, two generations live on the farm: their children Nika and Enej, and their grandmother Neža. They employ part-time a person to work in the barn and in the fields, and hire services for major work in the fields and on the sown grassland.

The herd comprises 35 black and white breed cows. Everything revolves around them, as the success of the farm depends on their milk yield and the quality of their milk. Attention is paid to the choice of varieties for fodder production, to the technology of fodder production, to storage, and more importantly to the composition of the fodder ration and the welfare of the animals.

According to milk yield per lactation, cows are divided into two groups, explains Peter. The ration is prepared in a mixer trailer as a stew. All components are homogeneously mixed and matched to the needs of the group. Knowing that the cows are milked at the snout, animal welfare is also high on the milk production scale. ” Thus, we have rubber pads on the grates in the barn, as well as on the bedding. The barn is also equipped with four fans and a shower, which provides a good climate in the barn,” he says. They use the 2 x 5 herringbone-milking system, with a milking time of 50 minutes. “Each cow has a motion sensor placed on a collar, which allows us to monitor cows and helps us to improve fertility within the herd”.

“We decided to start the supplementary activity of home dairy farming after the milk price dropped dramatically in 2008 and 2009,” Peter explained, adding that the beginnings of the new business, and even more so the marketing activities, were difficult and he would not like to go through it again.

They already process around 130,000 litres of milk a year, the rest is sold to Ljubljanske mlekarne through the Hoče Agricultural Cooperative Society.

” I first acquired the basics of milk processing at KGZ Ptuj, and later by attending various courses and seminars, including in Austria, Germany and France,” he recalls. Although he has acquired a lot of knowledge thanks to the wide range of products processed, he says, it is never enough. “There is never an end to learning, at least not for me. It’s how I learn new techniques, new recipes in milk processing and also new marketing strategies.” They buy all the ingredients for stabilising and curdling the milk, the flavours and additives and they are all certified “Produced without GMOs” and “Selected Quality”.

“We are trying to automate production as much as possible, although I occasionally hire students to help out. So, a few years ago we decided to buy a yoghurt filling and labelling machine, which has made our work much easier,” he says, adding that because most of the production is done in the traditional way, there is a bit more manual work involved (filling cottage cheese and spreads, cheese making and cheese care).

Peter Hecl: “Raw material traceability is our major competitive advantage. As the milk for processing is produced on the farm, we are in control right from the production of the fodder, milking and later on during milk processing. This is not easy. As a consumer, I would like to be able to buy things that have both traceability and control.”

All the products from the Hecl farm can be bought in their own shop at the address Orehova vas No. 44. Otherwise, their products can also be found in the Mercator retail chain in north-eastern Slovenia, E.Leclerc Maribor in the Dobrina cooperative in Maribor, Spar market in Ruše, and the Škrnicelj store in Ptuj. In 2020, within the project “Lojtrca domačih”, the Hecl farm started cooperation with the company Lidl Slovenia. Peter Hecl is pleased to see that dairy products from his farm are also increasingly present in public institutions (kindergartens, schools, nursing homes) in Maribor and the surrounding area.

The quality of Hecl dairy products was also confirmed by numerous awards, most of which were gained at the festival “Dobrote slovenskih kmetij” Ptuj, where they have been participating from the very beginning of their business. So far, they have won 16 gold and 8 silver awards for their products. Over the past six years, the Hecl farm has also won a number of international awards at the International Fair of Agriculture and Food Agra in Gornja Radgona. Mr. Hecl is especially proud of the Grand Gold Medal for his hard washed rind cheese and the silver medal for the soft French Camembert cheese.

He believes that participating at fairs is very important, as it can help you get independent information. “If it’s good, it’s an incentive, if it’s a bit less, it’s a challenge to improve the product.” In the future, they plan to participate in other international fairs as well.

With their farm located almost in the middle of the village, and the best farmland in the area also being “gobbled up” by the growing Hoče industrial zone and the infamous Magna car factory in the immediate vicinity, they don’t have much room for expansion. They thus share the fate of many farms in the surrounding area.

“As the country’s plans in this area are mainly focused on industry and tourism, and unfortunately not on agriculture, we have had no choice but to slowly start adapting to the new farming conditions. However, we also have to adapt our products and their diversity to consumers and market conditions.”

The Hecl family also sees a particular challenge in further diversification of their product range. “In the future, we would like to build a new and bigger cheese maturing room, which will allow us to make some more excellent cheese. We would also like to relocate our shop, which we have expanded twice so far, to a new location, and build a tasting room and possibly apartments.”

Given that this year will mark 10 years of processing on the farm, Peter believes that they were not too late in registering their complementary activity. At a certain point, certain events came together and triggered in them a reaction of defence, survival and reorientation of the farm. “All of this triggered in me the passion to create something new, something different. This activity allows us to put all our ideas into practice and encourages us to be more innovative.”